Asbestos In Stockpiles of Soil 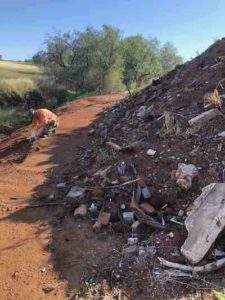 When is a Soil Stockpile ‘Waste’, and Can a Hotspot of Asbestos or ACM in a Stockpile be Removed and the Soil be reclassified?

Generally as consultants we have had a slight confusion on the strict regulation and guidelines information, and information received by NSW EPA in seminars, advice etc, on when contaminated soil becomes waste.

Why is that important?

Simply put, there are two pieces of legislation, and two branches of NSW EPA that regulate under each piece of legislation with different, and in some areas overlapping regulation. The Contaminated Land Management Act 1997, and the Protection of the Environment Operations Act 1997 under which the Protection of the Environment Operations (Waste) Regulation 2014 sits.

The question has been, when does a stockpile become waste?

Compliantly (and sustainability) dealing with asbestos impacted soil for instance, can be a large headache for large construction and development projects. Asbestos impacted soil for instance cannot have asbestos hotspots separated from a stockpile, or be stabalised for reuse under the waste regulations.  It can be buried in a containment cell or capped with a long term environmental management plan onsite (which will likely lower the property value) under the contaminated land regulation, but active remediation treatment options have not been available.

In the United States there is a destruction method that appears to be approved. The ABCOV® Method destroys asbestos with a non-thermal, United States Federal Environmental Protection Agency approved, chemical-physical process. The company has also launched in Australia, however we do not know if any projects have been approved by Australian regulators as yet. https://abcov.com/method/

In New South Wales, the answer to stockpile separation and when an item becomes waste was answered in a legal proceeding.

In 2019 a NSW Criminal Court of Appeal (CCA) decision has significantly changed the interpretation and application of waste classifications and offences under the Protection of the Environment Operations Act 1997 (POEO Act). It also helped to clarify when a stockpile is waste, and if asbestos hotspots can be removed from stockpiles.

Recent advice from NSW EPA iEnvi received, included an exception to the above:

The EPA does however allow a stockpile which may have 1 or 2 pieces of asbestos to be re-classified, however a very specific approach must be followed. This includes:

Disclaimer: The  rules for managing asbestos in stockpiles should be verified for your own project with NSW EPA, and the information above should not be relied upon.

CONTACT US For a Confidential enquiry about your needs now!

Large consistent volumes of landfill leachate emanating from a restored landfill site. The landfill had been used for many...

iEnvi was engaged by a local restaurant owner to manage the decommissioning and abandonment of three underground storage tanks (USTs)...

iEnvi were engaged by an engineering firm on behalf of a regional council to undertake a Construction Environmental Management Plan...

Microbiologically Influenced Corrosion (MIC) is a term that refers to the change (either acceleration or inhibition) in corrosion caused by...

iEnvi was engaged by a local council in the Southern Highlands to conduct an insitu Waste Classification (WC) and...

Envi was engaged by a construction company to review and update the erosion sediment control plan (ESCP) as part of...

The wastewater was highly contaminated with amines and phenols (COD up to 5000mg/l). The facility used a batch processing method,...

iEnvi was engaged by a law firm on behalf of a confidential client as part of merger and acquisition...

An old industrial site that had been used as a pesticide research and development facility required remediation. The ground and...

Turlinjah is a small community of 70 people on the NSW South coast of Australia. Previously sewage was collected...

Airports typically have their own fire and rescue service, and often have a training area on site where they can...

iEnvi was engaged by a Council north of Brisbane, QLD, to review environmental authority (EA) compliance, groundwater trends and risks...

iEnvi was engaged by a large construction company to conduct Targeted Soil Investigations and Insitu Waste Classifications (TSI/WC) in advance...

iEnvi was engaged to conduct a Targeted Soil Investigation (TSI) to delineate historical lead from a former rifle range, for...

iEnvi was engaged by an inner western Sydney Council to undertake a soil stockpile reuse investigation at a vacant property....

iEnvi was engaged by an international manufacturing company to undertake preliminary site investigations at two coatings manufacturing facilities in Victoria...

iEnvi was engaged by a brewing company to complete an Operational Environmental Management Plan (OEMP) for a new brewery...

iEnvi was engaged by a company to complete an Underground Petroleum Storage System (UPSS) and Detailed Site Investigation (DSI) for...

iEnvi was engaged by a law firm to complete a preliminary site investigation (PSI) and underground petroleum storage system (UPSS)...

iEnvi was engaged by a private company wishing to purchase a mechanic workshop in Wynnum, Queensland and a preliminary site...

In early 2019, iEnvi completed multiple preliminary site and soil investigations at recreational use parks in inner Sydney suburbs prior...

iEnvi was engaged by a client’s legal department as part of a merger and acquisition due diligence to undertake preliminary...

iEnvi was engaged by a childcare centre development company to undertake soil sampling at a residential site prior to the...

iEnvi was engaged by a client to undertake a preliminary site investigation and soil sampling (PSI) at a property in...

Blanks for the field and lab, what are they?